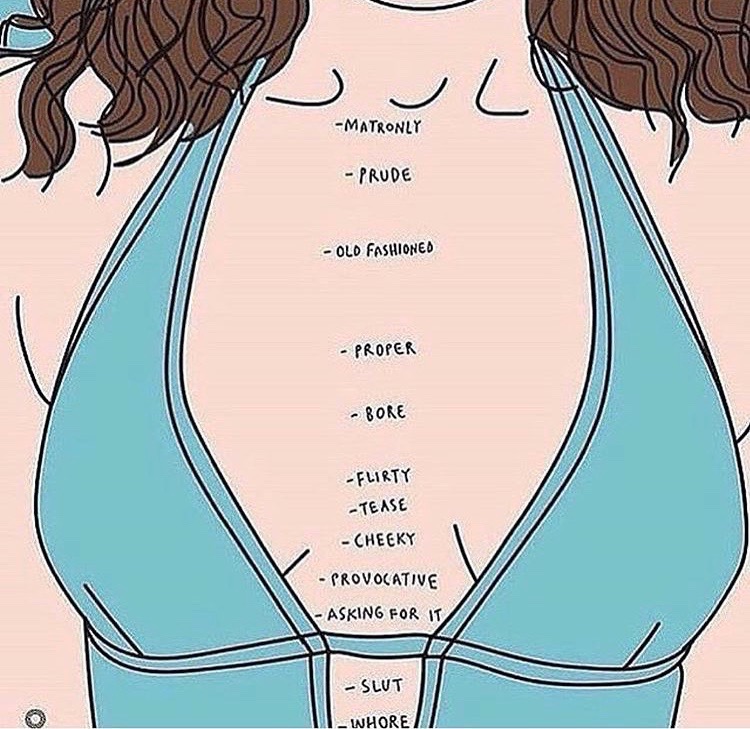 Who are you to judge how much of someone’s body that they decide to show? Who are you to decide whether that person is then a ‘slut’?

I know so many people who look amazing and beautiful in their photos but are too scared to post them because they’re worried that people will judge them.

For an all inclusive society, we’re sure doing a lot of judging.

But I think, after the amount of terrifying prep school movies we were made to watch about cyberstalkers, we get how to private our accounts and we understand that what is put on the internet stays there,

So who are you to judge?

My friend and I were talking about it, and she said, ‘if a guy posts a topless pic, no one cares. The second a girl does it it’s all this drama’ and she is so right. This isn’t a rant about feminism, no that’s coming later. The point is,

People should be allowed to dress as they’d like without assumptions.

People should be allowed to be who they are on their own social media page.

To finish today’s blog I’ll write my exact reply, ‘no, no, no. you look so good and if you like the photo there is no reason to take it down. People are always going to judge, but you need to remember that no matter what anyone else may say, you need to do what you want to’

“What do you see?,” I ask him, my eyes transfixed on the swirling mass of white fluff dappling the too blue, true blue, sky,

Spiralling, it begins as a dolphin, swimming in the sea of the sky, the above above our world, and turns into

A mermaid singing songs to the sailors ships, siren-like in her appeal and song, her powers of persuasion but changes into

A bird. Right at home among his own, soaring above cities, swooping and flying and riding the breeze like a wave, and for him, just living and now becoming

A bottle. What of? If only she’d know. Something bad for your health, your liver, and even worse for your judgement, something pouring into the blue, flooding it,

And the man beside me peels his eyes from his LED lights,

Glances impassively at the sky,

Glances impassively at me and says,

And falls back into the world of a phone,

While forgetting his own.

What’s the word? The word for when your heart fills and your mind buzzes and you just cannot get rid of that grin on your face? When you hear the thing you’ve been wanting to, waiting to, for too long? ‘You did it’, ‘It’s a boy’ or ‘I love you’. It can be as short as three words, or one, ‘yes’. As long as your language would allow a sentence to be. It could just be the right look at the right time from the right person and you just feel it. How can you put that feeling into words? That smile hidden, the smirk, because you just can’t stop yourself? That feeling of electricity coursing through your veins? That heart race and complete contentment, undeniable and unstoppable? You know what I’m talking about, right? You wanna know what I call it? What word encompasses all those strong feelings, that undeniable joy?

For those sunny days where the heat seeps through your skin, for those rainy days where you and your friend can’t breathe through the laughter, for those moments with that person you love where you just never want them to end. For the tears you cried and someone wiped away, for those lonely nights made better by the only person who could, for those secret jokes and moments, memories in your mind which mean more to you than any money or gift ever could. You want to know what I call it?

And just you, still being here reading this, just your eyes scanning over my words, just the breath you just let out and the one you’re about to take in,

Want to find an old blog?